I have been wrestling with how to present this information, because there is so much already available.  It is photography 101, the basics, plain and simple.  My goal is to present some more in depth, deep dive information to really get people thinking about photography in a different way.  I am going to start by introducing exposure value.

The exposure: what is it?  How is it controlled?  Most cameras have some form of a light meter to gauge how much light is in a scene.  Another way to express this is with the words: luminance or exposure value.  These are essentially measurements of how bright or dark a scene is.  A camera can capture a certain range before things are completely black or completely white.  Somewhere in between completely black and completely white is middle tone grey.  The actual value for middle tone grey is 18% grey.

Exposure value (EV) is based on this scale of luminance.  A camera is essentially trying to make everything a middle tone grey.  The range of a scene, however, can vary anywhere from pure black to pure white.  Digital cameras show this information in the histogram.  A light meter has a scale of plus EV and minus EV with the middle being zero.  This zero point is where the exposure value is calibrated to achieve middle tone grey.

Underexposed scenes will tend to lose information in shadows and blacks.  This is referred to as clipping.  Clipping is when the exposure value is insufficient to capture information.  Overexposing a scene can also result in clipping in highlights and whites.  The goal is to have the sensor capture a scene that is not completely black nor completely white, rather more toward the middle tone grey range.  Again, this is where the needle reads zero on the scale.

There are essentially three ways to control the exposure value: aperture, shutter speed, and ISO.  Each one of these settings controls how much light reaches the sensor to create the exposure.  Aperture is the physical opening of the lens that light passes through to reach the sensor.  Shutter speed is the duration (time value) that light is allowed to reach the sensor.  ISO (was referred to as ASA for film speeds) is an increase of the sensor’s sensitivity to light.

The combination of aperture, shutter speed, and ISO is often called the exposure triangle.  This is due to the balancing act of changing these settings to achieve the correct exposure value.  The exposure triangle can also be used to create certain aesthetics in photographs.  I will be doing a series of posts that dive deeper into each setting over the next couple weeks.  Stay tuned!

I joined the “smart” phone crowd, yesterday.  That means I am getting used to all of the bells and whistles that come with using a smartphone.  There are a number of apps already installed, including the one for wordpress.  However, I think my favorite so far is the one for grocery shopping!

I read a book from the library, a few months ago, about how to integrate smart devices into the photographic process.  The book primarily focused on the iPad.  However, many of the apps can be used on other smart devices.  I will be checking out several of these apps.

I also have the Speedlite 600EX-RT flash that can be setup off camera for E-TTL.  This gives me a little bit more ability to try some creative lighting setups.

I’ll be playing around with the flashes and burning through batteries while I learn.  Let the fun of conquering flash photography begin!

I decommissioned the Canon Powershot SD 600 the other day.  A few of the features were starting to fail – i.e. the zoom no longer worked.  I decided to dive into the camera to see if I could fix the problems.  It turned into more of a project to find out what the inside of a camera looks like.

Here is an interesting macro shot of the sensor from the Powershot SD 600.  I used my Canon 5D III with a bellows and a Super-Takumar 55mm f/1.8 lens to get this shot.  The spec on the sensor is a grain of salt; it is for size comparison.

Posted by JUST PhotographIN' on August 23, 2013
Posted in: Geeky. Leave a comment

Here are a couple of pictures to show old versus new! 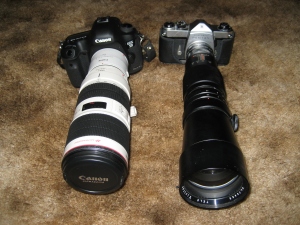 How much is too much?

Of course, photography requires equipment [gear or gadgets]!  With different photographic subjects comes a list of required and optional gear.  How much is too much?

My main drive for photography has been to explore the natural world around me.  That includes landscapes, wildlife and wildflowers.  My macro lens can focus at 11.92 inches from the focal plane giving a one to one life size image of the subject.  On the other end of the spectrum is my wide angle lens that gives almost a 90 degree angle of view.  All of this equipment is great for each specific situation.

I have been observing a lot of wildlife and have been trying to photograph them with my 70-200mm lens.  What I find is that even with a 2x extender [making the lens a 140-400mm], it is difficult to fill the frame with the subject.  Either I do not want to get that close, or the subject does not want me that close.  This has me thinking that it may be a requirement to eventually add a 400mm lens to my collection.  The other option may be to add a cropped frame camera and continue to use the same lenses [glass] that I already have.  The advantage to this option is that I can get an increased focal length for a somewhat cheaper expense than adding the lens.  Canon cropped frame cameras have a 1.6x increase in focal length to compensate for the difference in full frame glass.  This means that the 70-200mm lens becomes a 112-320mm lens.  Either way, I think another piece of equipment may be in my future.

Back at the beginning of the month, I was experimenting with portrait photography at Vacation Bible School at church.  I do not currently have a flash.  Some of the events were inside with very poor light.  In order to get decent photos, I was bumping the ISO up which meant post processing to reduce noise.  Some of the events were outside with very bright sun.  It would have been nice to have a flash in both situations.  Inside, I was not able to get a fast shutter speed to stop motion without out introducing noise from a high ISO, or I would have an underexposed image.  Outside, I needed a little bit of fill light to reduce some of the contrast between light and shadow areas.  A flash can be a handy tool to manage light in many situations, and I can see that this may be a piece of equipment I add to my collection [possibly sooner than later].

There are plenty of other pieces of equipment that are on my list.  I am also certain that I may find things that I never thought of that will end up in my collection.  It is just a matter of how much is too much!

Posted by JUST PhotographIN' on May 6, 2013
Posted in: Geeky. Leave a comment

Now that I have a more capable computer, it is time to start getting into software updates!  First off, I am trying the Adobe Lightroom 5 Beta.  It is downloading as I am typing!  It is great to finally have a computer that can run all of the software, and do it quickly!  🙂

I will post a review of Lightroom 5 Beta after I get a feel for it.

Posted by JUST PhotographIN' on May 3, 2013
Posted in: Geeky. Leave a comment

Today, I made a productive trip to a few stores to look at equipment.  I purchased a few new accessories and updated my equipment list.  The two most notable items are a new tripod and a new photo editing computer.

Posted by JUST PhotographIN' on April 26, 2013
Posted in: Geeky. Leave a comment

I realized that I have not mentioned that the photo metadata is available for basically all of my photos through the smugmug site.  It is attached to the image file when the photo is taken and provides camera information and settings, if anyone is interested.  I have not gone completely wild with camera accessories, yet!  I know some photographers have GPS locations attached as part of their metadata.  One of these days… maybe!

Not all of the information is provided for every photo.  Some of the items included in the metadata are:

My Limited Knowledge On The Byte. Slightly Geeky.

Posted by JUST PhotographIN' on February 24, 2013
Posted in: Geeky. Leave a comment

Someone asked me the other day – What is a TB when used in computer terms?  TB stands for Terabyte.  So, what is a byte?

A byte is the unit of measure of one character of text on a computer [the most common size byte being 8 bits, but it’s apparently not standard].  Another way to say this is a byte is the base unit of measure for how many characters computer storage/memory space can hold.  So, a 1 byte drive can hold 1 character of data.  Working from 1 byte, the next largest measured capacity is the kilobyte.  1 kilobyte is 1000 bytes [or characters] of data storage space.  They could theoretically have a decabyte [10] and an hectobyte [100], but they aren’t typically used as a measure of computer storage capacity.  Bytes are based off of the base 10 [metric] system.

The meter is the unit of length in the base 10 system.  Some of the more familiar measures of length are:

So, replace meter with byte and you have the same table:

A byte can be or is made up of bits, but I won’t get into that!

And one last one for kicks!

Computers rarely run programs straight off the hard drive.  They usually pull the data that is required to run the program into memory because the memory can communicate more quickly with the processor and other computer components.  That is why some programs take a while to load but then run more quickly after they have loaded.  As long as there is enough memory, there should be enough space to run everything fairly quickly!

If there is not enough memory, the computer then has to decide what information is more critical and try to pull that data from the hard drive onto the memory.  The process may have to repeat several times.  It has to clear memory space before it can pull more information off the hard drive.  That is also why a computer slows down when it is running multiple programs at the same time.  Now it is really filling up all the memory space with a lot of bytes and the computer has to start backlogging processes in order of priority.

Also, program load, run speed or download speed can also be calculated.  A connection speed of 1KB/s is transferring data at a rate of 1 kilobyte per second. A 1 kilobyte file takes 1 second to transfer at that rate. Now, a 3MB file at 300KB/s is going to take how long to download? Convert megabytes to kilobytes. 3MB equals 3,000KB. Take the program size [or file size] divided by the rate to get time. 3,000KB / 300KB = 10 seconds for the amount of time for that much data to make the transfer.

That’s a long explanation to what a Terabyte is, but hopefully it makes more sense now.  The larger the size hard drive, the more bytes [characters] it can hold.  However, that doesn’t mean increased computer performance.